This trip is the longest trip I have attempted to date, the fact that a made the trip on a very windy day added to the challenge.  Total distance of the trip is just about 13 miles.  The trip took about 4 hours with a quick stop for lunch, but it would have been faster if not for the wind in my face for most of the trip.

I didn't want to start this trip so far north but I couldn't find any kayak launches on the Merrimack River in South Nashua.  The launch I used is behind Greeley Park.  The launch was not on the state boating access site so I assume it is a maintained by the city.  To get to this launch head north on Concord St. past Greeley Park.  After the convenience store take a right onto Hills Ferry Road.  Hills Ferry road curves to the left, after the curve there is a dirt road on the right with a sign for the boat launch.  Cross the railroad tracks and follow the dirt road to the ramp.   The launch itself is a bit rough, most of the ramp is paved but it is deteriorating at the water's edge.  It is fine for kayakers and canoer's though.  There is plenty of parking on the sides of the dirt road/path.  As I was putting in there was a group of 8-10 kayakers dropping off cars for the take-out for their trip upstream. 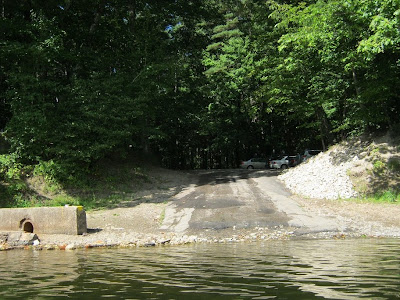 Nashua Boat Ramp
The river banks on this section are fairly undeveloped.  A few houses here and there but for the most part the banks are mostly high and wooded.  About 2 miles downstream from the put on on the right side is the mouth of the Nashua River.  I would have liked to paddle upstream on the Nashua a bit but I needed to conserve my energy for the trip to Lowell so I will have to leave that for a future trip.  Although I am not sure how far upstream you can paddle without portaging as I believe there is a dam not too far upstream. 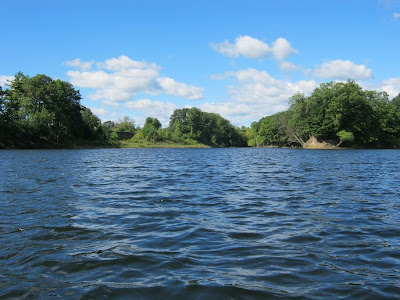 Mouth of the Nashua River
Just after the mouth of the Nashua River you pass will pass under the two route 111 bridges.  After passing under the bridges the are two old stone bridge abutments standing in the water.  They have some shrubs growing out of them  which makes them a but odd looking.  Kind of reminded me of something from the TV show Lost. 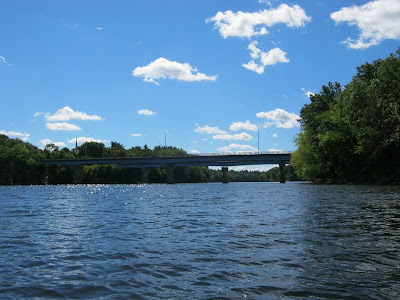 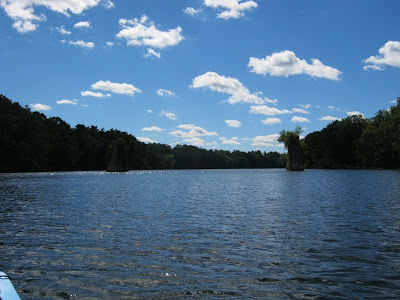 Old Bridge Abutments
As I mentioned earlier the banks are fairly undeveloped.  The right bank has a railroad track running along side it which is why there is no development to be seen.  But there are some interesting stone bridges along the way.  Another area that would be nice to explore on a future trip below. 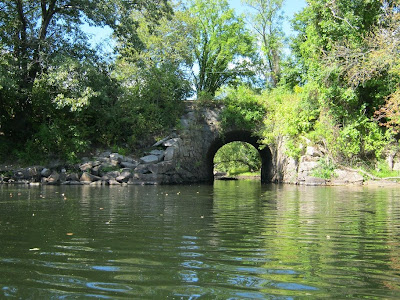 Stone Rail Bridge
As I headed further downstream I could see in the distance what looked like something white bobbing up and down in the water.  As I got closer I realized that it was actually splashing water.  I picked up my paddling pace a bit in case someone was in trouble, not that I could rescue anyone from my fairly unstable kayak.   As I got even closer still I realized that the splashing was in fact water bubbling up in form of  a small geyser from some underwater discharge pipe.  I had a good idea what might be bubbling up there so I didn't get too close but did snap a few pics.  Upon getting home and performing a quick google search I found that there is a waste water treatment plant right behind where the small geyser was.  The water around it looked to be kind of soapy so I am hoping that it was in fact treated.  The area did not smell any worse than the rest of the river so I am hoping that I did not paddle through raw sewerage. 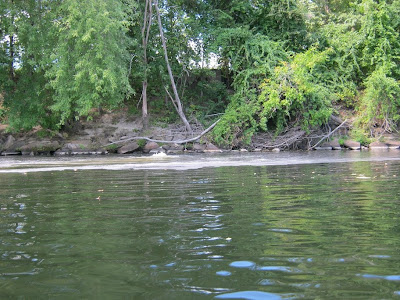 Continuing downstream for a couple more miles you will pass under the second set of bridges of the trip.  The secind set of bridges is the Circumferential Highway Bridge which connects Route 3A in Hudson NH to Route 3 and the Daniel Webster Highway in Nashua.  A couple more miles downstream and you will cross the border into Tyngsboro MA.  This was a little past the halfway point of the trip but was a good point for me to stop for a quick lunch.  There are very few places to stop along this stretch of the river as the banks are so steep and high.  the spot I found was apparently used frequently as there was remnants of a bonfire and some trash strewn about.  Not sure why people don't pick up after themselves. 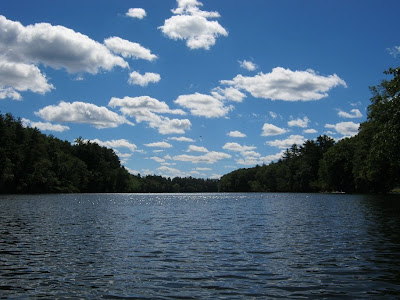 Not a bad view for lunch

The Tyngsboro leg of this paddle was interesting for me as I grew up in Tyngsboro but never explored the river so it was nice to see a new side of the place I grew up.   Just about 2 miles into Tyngsboro on the east bank of the river there is a park being constructed.   From the water I could see benches and there appeared to be grass planted so it may be close to opening.  Most importantly is there is a kayak launch in the park.  This park used to be a trailer park that was closed years ago.  The park can be accessed from Frost Road once it is opened.  A quick google search turned up nothing on the park so I guess I will need to keep checking back. 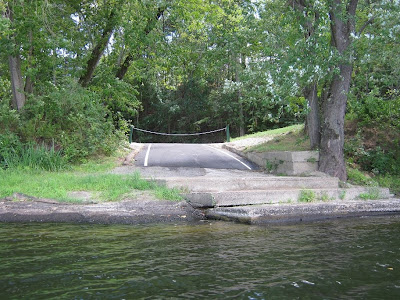 Tyngsboro kayak / canoe access
After the park the river twists to the right then back to the left and straightens out for the run under the old Green Tygnsboro Bridge.  The old green bridge is currently under construction so there is a temporary bridge right next to t that is carrying the traffic. 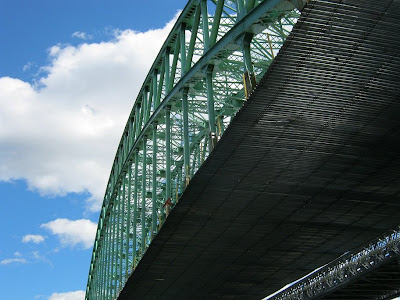 A bit before the bridge and for the next mile or so there is a 20 foot hight stone wall running along the west bank if the river.  There are a couple stone rail bridges along this stretch as but surprisingly not a lot of graffiti.  When I was in elementary school I was told there were tunnels in this section of the river leading to the Tyng Mansion that were part of the underground railroad.  I paddled pretty close to wall for the entire stretch but did not see the remains of any tunnels.  If they are any tunnels there I am sure they were sealed up long ago for safety reasons. 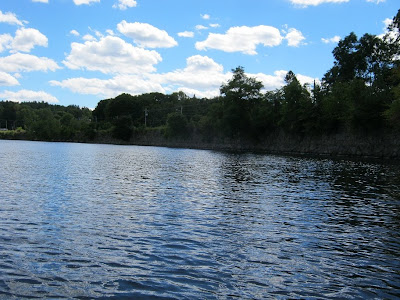 Continuing downstream for a couple more miles you will con upon the Vesper Country Club.  There was quite a bit of boat and jet ski traffic on the outside on the island so I opted to paddle on the inside.  I made an trip with the MRWC upstream and around the island a couple weeks ago so you can go here to see this section of the trip. 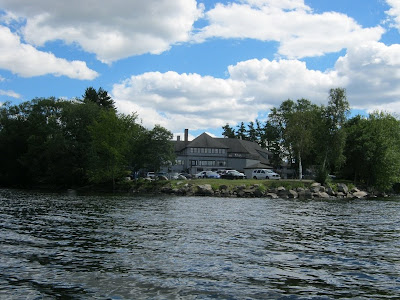 Once past the Vesper Country Club I paddled about 2 more miles to my take-out at the boat launch in Lowell.  There is an alternate take-out at the North Chelmsford boat launch which I used a couple weeks ago for my trip with the MRWC.  The Lowell boat launch is really nice and fairly new I think.  There used to be a launch further downstream across from Heritage Ice cream but that has closed.  The Lowell Boat launch is called the Rourke Brothers Memorial Boat Ramp.  The ramp is intended for power boats but is wide enough for a kayak to sneak in on the sides if a power boat is launching.  The parking lot is very large and paved (unlike the North Chelmsford ramp) and there is a dock on the left side of the ramp.  Given their relative proximity, parking availability and ease of getting in and out of I would definitely use this ramp over the North Chelmsford Ramp. 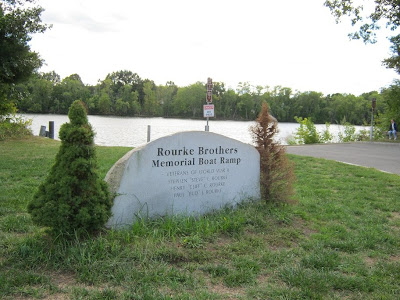 I think this would have been a perfect trip had it not been for the wind.  The wind probably added a half hour to the trip and I am still feeling it in may arms and shoulders a few days later.  What I love about taking new kayaking trips is that they always spawn a couple new trips for the future.  Really looking forward to teh opeming of the new park in Tyngsboro as there are so many intersting little places to explore around that section of the Merrimack river.
at 8:01 PM 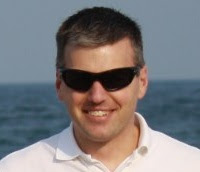